On Monday evening, 9th June 2014, we visited the farm at High Calingill, a few hundred yards south of Low Borrowbridge, as the guests of David and Christine Knipe. Around a dozen members turned out, despite the weather (and midges!).

We started the evening by looking at the outside of the farmhouse. Hilary Wilson, who lived there before the Knipes, was told a wooden board, dated 1647, had once been found in part of the house but had been burned when it fell off and broke! The farmhouse does appear in the historic record for Westmorland, and is listed as being of C17th origins. From the outside it appeared that the house had originated as a two room farmhouse, probably with firehouse, or main living room and kitchen to the right (with hearth and range), with a smaller parlour (sleeping quarters) and buttery/dairy to the left. The house was attached to the barn and byre on the right. It has subsequently been extended, but has not lost any of its original charm. 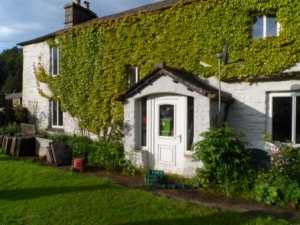 We were also able to look at some of the stonework on parts of the house that had not been lime rendered. In particular some corner stones (quoins). These were sandstone, quite different to the other material used in the construction of the house and outbuildings, and not immediately locally available. Their regularity makes us think they are probably reused stone from the Roman fort at Low Borrowbridge, less than half a mile further north up the River Lune. It was documented in the 1800s that stone was taken from the fort to build the house and outbuildings at Low Borrowbridge farm, which was owned by the same family (Branthwaite then Moser by marriage) until the 1960s.

After looking at the house we walked down to the Lune and along the east bank as far as Salterwath Bridge. Salterwath means ‘ford on the salt route’ suggesting an earlier crossing. We also know that the Roman road to Low Borrowbridge crossed the Lune around here and there are some traces of a possible bridge foundation to the west of the current bridge. Along the river we found an interesting platform that suggested another crossing further down river. Hilary later found out that this was actually a fishing platform built by the owner of Littleholme, the converted cottage next to the farmhouse, only a few years ago! We picked up a number of artefacts along the river (mainly metalworking slag, pottery and brick) and will be sifting through them in due course to see what we can learn. 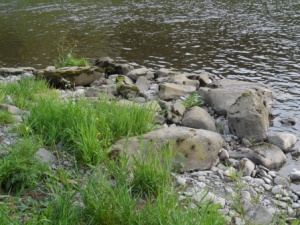 Turning south along Howgill Lane we came again to the track off right to High Carlingill Farmhouse. In the field on the left lies a ‘Romano-British’ settlement. This is an impressive set of earthworks that are still upstanding to a meter or more in places. A brief examination, plagued by midges and increasing threat of rain, was followed by a hasty return to the farmhouse where Christine had prepared tea, coffee and delicious cakes for everyone. We plan to return to the settlement site and undertake a full plan of this substantial monument next summer.

Many, many thanks again to David and Christine Knipe for being such generous and welcoming hosts.